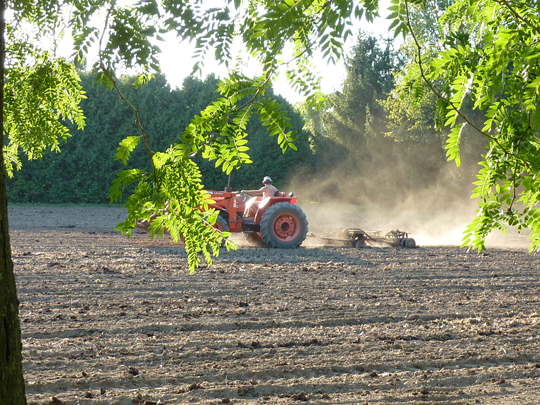 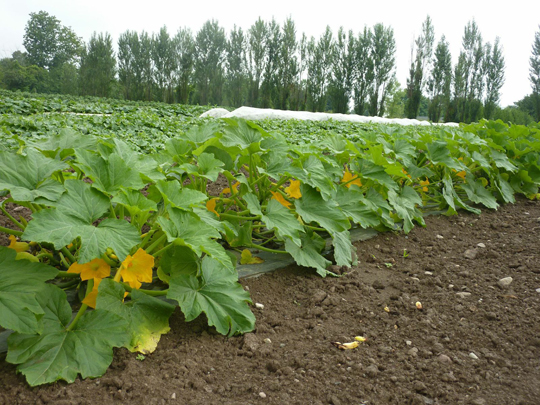 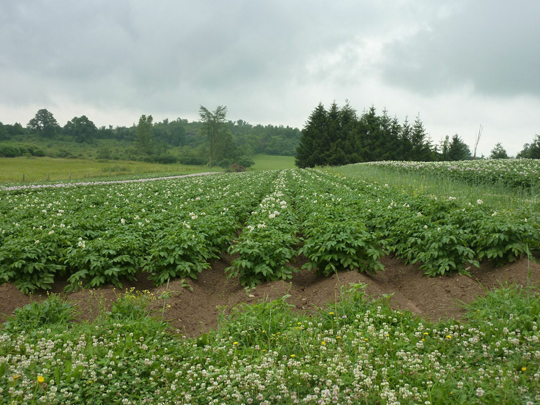 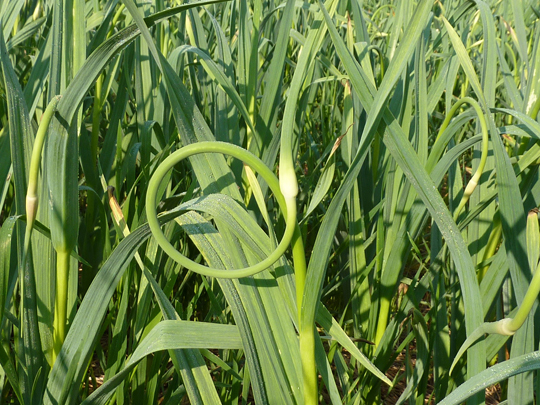 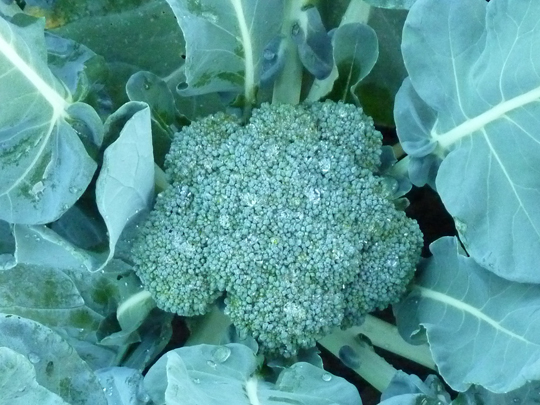 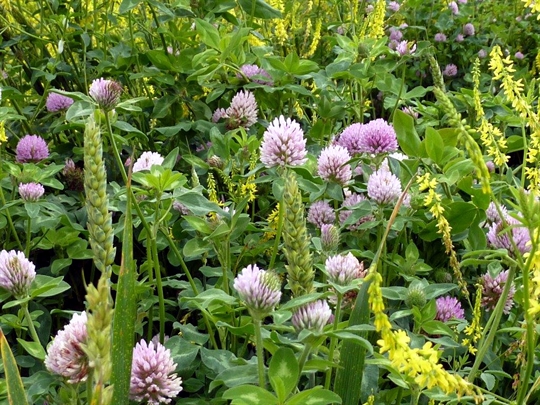 The foundation of organic agriculture is soil health, and we do our best at Golden Russet Farm to maintain and improve the characteristics and fertility of our vegetable fields.

When we bought the farm in November 1984, we did so with the knowledge that much of the land was Nellis loam. This rich, glacially-deposited soil acts more like clay than sand when it is wet. On our farm, it ranges in depth from 3” – 12” on top of good old Addison County clay, and the fact that the Nellis topsoil profile is so thin results in a real need for us to manage things in such a way so as to mitigate soil loss and promote tilth.

Enhancing organic matter in the soil encourages biological activity within it. For purposes of this discussion, that means having a lot of earthworms moving up and down throughout the soil profile, creating drainage holes as they go. This is important, given the severe rain and violent weather events we’ve been having over the last several years, because increased drainage gives water puddles a chance to infiltrate the clay hardpan, instead of sitting there and potentially drowning or stressing the crops.

We use aged manure and compost for much of our fertility needs, and typically apply it to the fields in the fall, when it can be incorporated into the soil. The nutrients are taken up and held in the roots and leaves of our overwintered cover crops. We also occasionally use bagged supplemental organic fertilizers (as needed) such as Peanut Meal, Sul-Po Mag, and North Country Organics’ Pro Gro.

While attending to the annual nutrition needs of the crops is important, long term approaches to the overall health and carrying capacity of the soil is critical for sustainable organic crop production. Crop rotations are the core of organic management, and there are a number of ways to do it:

We’ll look at each category, and in the interest of full disclosure, one should keep in mind the fact that what is described below should be seen as aspirational goals that we strive to achieve, and that we occasionally fall short because good intentions can sometimes fall victim to harsh realities.

Rotate Between Families of Vegetables

Our goal is to avoid planting crops of the same family on the same field more than once every four or (preferably) five years. Some vegetable families are quite extensive, which makes rotations challenging. For example, a short list of Brassicas includes broccoli, kale, cabbage, turnips, and mustard. Popular Solanacea include potatoes, tomatoes, eggplant, and peppers. The point is that varieties within the same family are generally subject to the same pests and diseases, so rotating families of vegetables to different fields from one season to the next helps break the pest/disease cycle, and reduces that pressure on the respective crops. While we don’t have a “typical” rotation schedule here on the farm (we wish; there are just too many variables!), we often follow a potato crop with winter squash, followed in turn by sweet corn.

Another factor in considering what vegetable crop should follow another involves an assessment of the potential impact of weeds. Effective weed management is a critical part of ensuring high yields and profitability, so we don’t want to plant high-maintenance crops (such as onions) into fields that have high weed pressure. For example, corn tolerates weeds pretty well, and typically those weeds reach maturity during the course of the season. This means that the weed “seed bank” for the following season will be high. As a result, we’ll follow corn with a crop (such as broccoli) that we can manage so as to reduce the weed seed bank, with the aim of planting onions in the following year. This planning ahead helps us avoid costly hand-weeding, which is no fun for anyone!

A third factor we use in inter-family rotation decision-making involves weighing the planting schedules for the current season against the crop(s) that were grown the season before. For example, we will not plant spring crops in a field that had Brussels sprouts, kale, peppers, or some other late crop that may still have dead stalks standing in the field well after the snow has melted away. The crop residue interferes with the ability to create a good seedbed, and given the tight time frame for spring planting, removing it makes this a difficult and costly proposition!

Rotate Between Vegetables and Non-vegetable (or “Cover”) Crops

This practice involves both the short (within one year) and long (four or five year) time frame. In both cases, we adopt the philosophy of “green is good, brown is bad,” which simply means that when we look at the field, we should see something growing on it and not bare dirt.

In the one-year time frame, we like to follow a vegetable crop with a short-term cover crop. For example, we’ll plant buckwheat after a spring crop such as peas, spinach, etc., or a winter cover crop, such as rye or wheat, in the late summer/early fall, on whatever ground is finished growing a vegetable crop. This practice is intensive and means that something is always growing on the land.

Planting Vegetables on a Field 3 out of 5 Years

In the longer time frame, our goal is to plant vegetables on a field three out of five years. This gives the field a “rest” from the potential compaction that occurs in the course of intensive vegetable production, including seedbed preparation, tillage, planting, cultivation, and harvest. It also breaks the cycle of certain weeds that thrive on open, annually cultivated soil, and gives us a chance to adjust any nutritional needs that soil tests might indicate. In practice this involves overwintering a cover crop such as wheat or rye, planting clover into it early the following spring, and mowing the wheat/rye when it is about 6-8 inches tall. This action releases the young clover, which we then mow and grow for two years before plowing it back down the fall before a vegetable crop. In this way we “feed” organisms in the soil decaying green matter, which helps build up biological activity and overall tilth.

This practice simply involves sowing a cover crop over a pre-existing vegetable crop. Care must be taken to pick and time the planting of cover crops in such a way so that they don’t compete – and potentially reduce the yields of – the vegetables. Overseeding ensures that the fields remain green with cover crops after the vegetable harvest is over. We commonly plant hairy vetch over the winter squash crop in early July, when the vines are just beginning to run. It hangs out all summer under the lush squash foliage until harvest time, when the foliage cover melts away. This serves several factors, including dealing with the difficulty of getting a successful cover crop “catch” on the post-harvested field late in the season. Additionally, because vetch is a legume, it fixes nitrogen from the air in its roots, which essentially feeds the soil for free!

Another example of overseeding that is gaining in popularity in Vermont relates to water quality, which has become a major issue over the last couple of years. Many dairy farms have begun overseeding rye onto their corn crop in late summer, with the result that corn fields are covered with “green” as they go into the winter. This reduces the potential for erosion and nutrient leaching and improves the prospects for our rivers and lakes.

As you may have noted (if you’ve stayed with it this far), successful organic management involves a lot of factors! It’s analogous to house painting, in that it can be 80% preparation and 20% execution. A lot goes on behind the scenes in order to provide what ends up on your dinner plate!