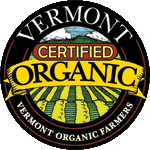 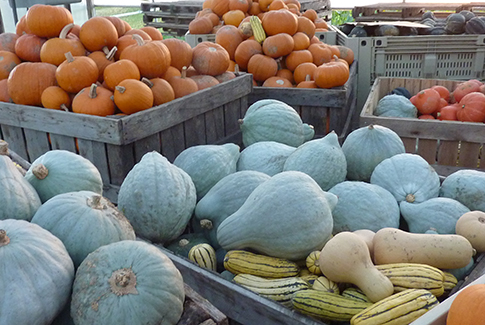 Bins of squash and pumpkins are a sure sign of fall

Golden Russet Farm prides itself on growing everything from “Asparagus to Zucchini,” but there are a few crops that we take a particular interest in, and for now, let us introduce you to two of them: pumpkins and garlic.

Late in 2007, Morgan Wolaver, owner of Wolaver’s/Otter Creek Brewery called and asked if there was any way we could have ripe pumpkins in July, and Will quickly told him, “No way!” before recovering and asking him, “Why?”. It turns out that he was looking to enter the pumpkin ale market, and thought that we might be able to help him out. As fate would have it, we happened to be sitting on a bumper crop of pumpkins, so we offered to give him some, if he thought it might work to process and freeze them for use the following summer. He was willing to try, the handoff was made, and in August 2008 “Will Stevens Pumpkin Ale” hit the shelves!

Morgan sold the Wolaver’s/Otter Creek Brewery business several years ago, but the Pumpkin Ale lives on (although without Will’s name)! We now work with Brewmaster Mike Gerhart to supply the finest, most flavorful pumpkins for their brew, which is one of the very few in the country that uses whole pumpkins (as opposed to an extract) in the brewing process. It seems to be working, since Wolaver’s Pumpkin Ale won Boston.com’s Best in Class in 2013, and the Great American Beer Festival’s gold medal in 2014!

Golden Russet Farm is pleased to have a great working relationship with Wolaver’s/ Otter Creek Brewery and appreciate their willingness to add value to a small part of Vermont’s working agricultural landscape! Check our Facebook page as the season progresses for updates as this year’s crop goes from seed to harvest! 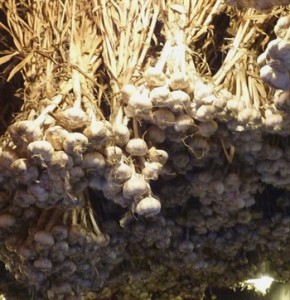 The shed rafters are filled annually with bunches of garlic.

Back in the early- or mid- 1990s, our good friend Kirk Webster gave us a garlic bulb he had grown from stock he had acquired several years earlier from an Amish farmer in southern Ohio. He especially liked the strain because of its size, flavor, appearance, and peeling qualities. We planted the eight (or so) cloves the following season with good success; the result was eight (or so) decent-sized bulbs. (Full disclosure – we have never been able to get the enormous size Kirk gets, but we keep trying!) We liked what we saw, so for the next several seasons we set about growing out our supply of garlic until we felt we had enough to both sell and set aside for seed. The response from the beginning was great, and it continues to be to this day.

A Similarity to Red Russian Garlic

Fast forward to late summer 2010 (or so): Tom Vogelmann, Dean of the University of Vermont’s College of Agriculture and Life Sciences, stopped by the farm and noticed the garlic crop hanging from the rafters in our shed. We’d gotten to know Tom through Will’s work in the Vermont Legislature, and it turned out that he was quite a garlic aficionado who trials about 40 varieties each year in his home garden. We gave him some of our (Kirk’s) garlic to grow out, with the hope that it might resemble some named variety he was familiar with, which he did. The following year he let us know that our garlic was essentially the same as the Red Russian he grew.

While it wasn’t bad news, it was a bit deflating to lose the mystique of the special status that we had ascribed to “our” garlic. That said, with twenty-plus years of selecting the best of each season’s crop to replant, we have arrived at a strain that is well-suited to our soil and growing environment, which continues to have all the attributes that Kirk gave to it so long ago. It is still our main garlic variety, although we don’t sell it as Red Russian (or any other name, for that matter)!

Ten Different Types of Garlic- Ready in August or September

In the interest of diversifying our product line, a number of years ago we began growing out different varieties of garlic. Some were given to us by friends or customers, and some we picked up here and there along the way, simply because they intrigued us. For this year we hope to have about 10 different types of garlic to sell, and we encourage you to stop by the farm in August or September when the harvest will be on full display! And yes, it has been pointed out that Golden Russet Farm is a vampire-free zone as a result of our garlic display.